Restaurant review #101 – Reminder – GIVEAWAY to celebrate 100 restaurant reviews & 3 years The Bruges Vegan.
Greenway is a Belgian vegetarian brand (restaurants and products) and was founded by Paul Florizoone in the mid nineties. The first Greenway restaurant opened in Ghent in 1996 and I vividly remember it opening at that time (I worked nearby and was thrilled!). Meanwhile there are three Greenway restaurants in Belgium (Ghent, Louvain and Antwerp) and a take-away/foodstall at the railway station of Bruxelles-Midi.
I already blogged about the Greenway in Louvain and the Greenway in Antwerp.

We stopped for lunch at the Greenway in the train station of Brussels on our way to Vegfest London (see our blog, with also a review of lectures from the intersectionality Conference HERE). We had some spare time before boarding the Eurostar to London, and were a bit anxious whether we would get any (decent) vegan food on the train ride to London, so decided to have something to eat at Greenway beforehand. 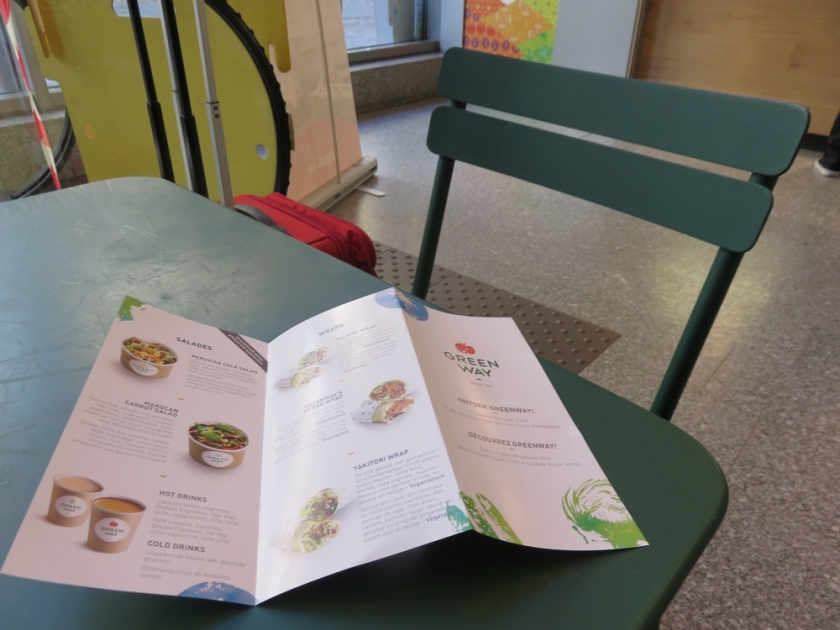 Menu and chairs at Greenway Brussels

Vegan options are clearly indicated on the menu. You order at the counter, and wait for your order to be called out so you can pick it up. Service was friendly, and we didn’t have to wait long for our food.
We had a Mexican smoked Jalapeno burger (7,95€) and a Yakitori Wrap (7,95€). Fresh juice was 5€. 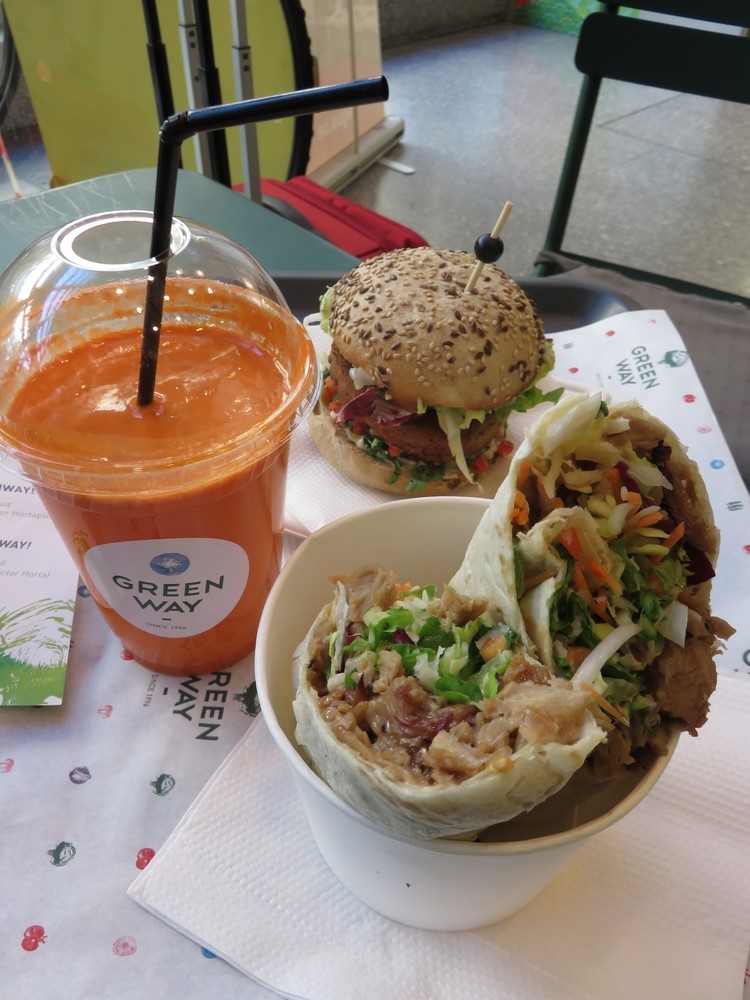 By the way, the vegan food on Eurostar wasn’t all that bad (and I was even surprised they even had a vegan option – tick it when booking). But it we didn’t get very much, so we were glad we had filled up at Greenway. 🙂
This is what we were served on Eurostar on the way to London, and coming back from London to Brussels. On the way back it was ‘breakfast’ as the train had departed before 11AM. So we were glad that we hade bought some vegan wraps at St Pancras train station before boarding! 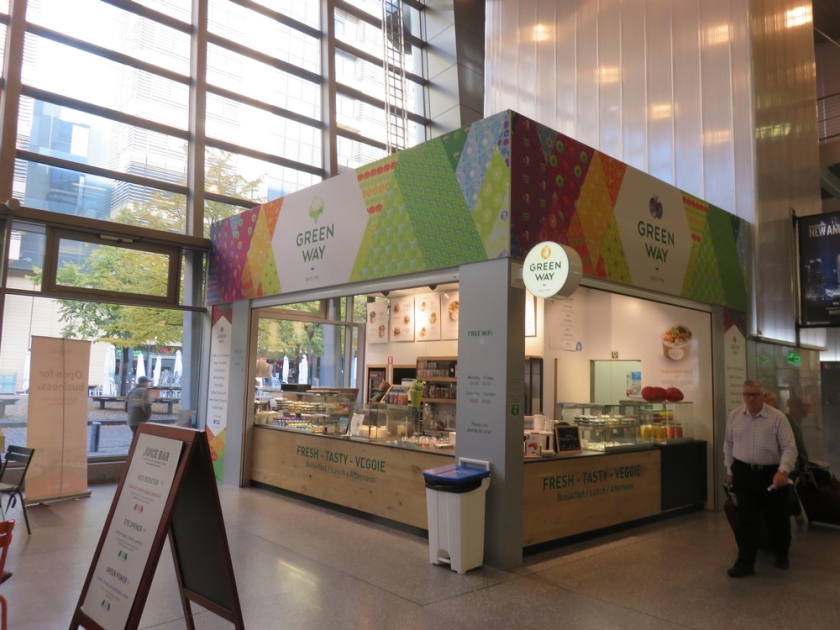 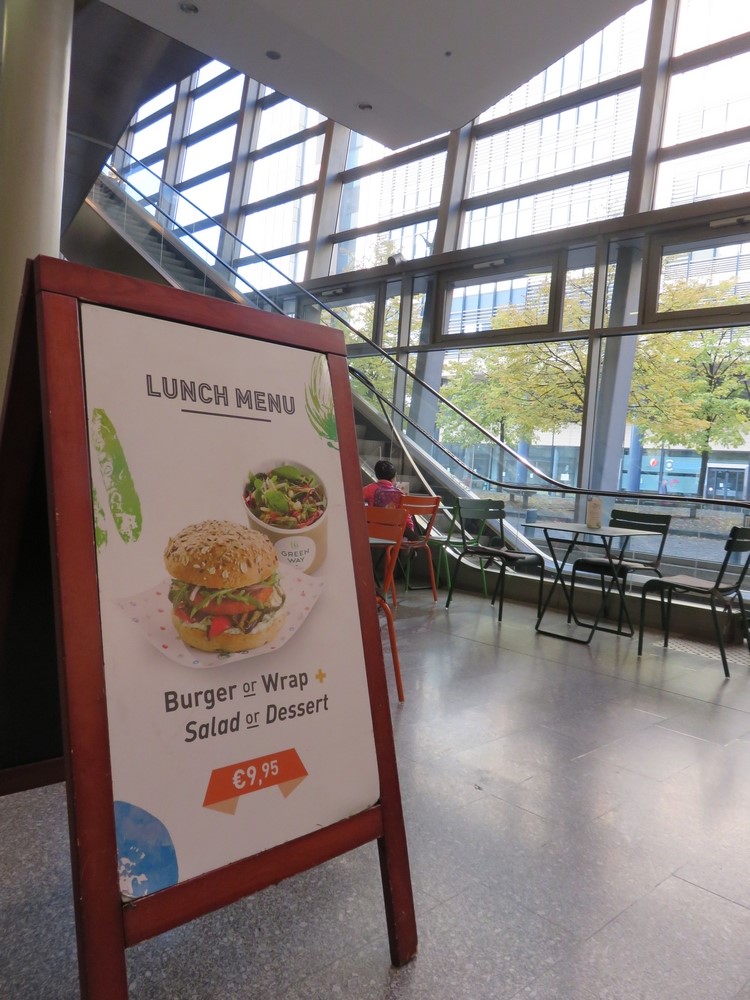 Seaweed croquette from @nomet.be .
We had a really lovely lunch at Tastou in Weert (NL) @lunchroom_tastou
It had been a couple of years since I visited @verocaffebrugge .
Fresh, healthy and cheap!
We had a lovely dinner at vegan restaurant @lentohasselt , in the city center of Hasselt.
That's dinner sorted! 🤗😊
National dishes à la vegan for our national holiday 🇧🇪 😁
Oh, how I wish this was closer! When we were a couple of days in Limburg, we went to organic vegan shop @bio.vegan.winkel in Budel (NL).
New place in town! Coffee house @basiel.urbangreenhouse