Restaurant review #54 – A couple of weeks ago, we were in The Hague. Den Haag or The Hague, is about a two hour drive from Bruges (210km). It is the administrative capital of the Netherlands (Amsterdam is the official capital, but parliament etc is housed in The Hague).
Online, I had discovered a nice looking vegetarian restaurant which has just recently opened (in the beginning of 2015) and within walking distance from the city center: resaturant Hortus. And it seemed they had lots of vegan options. So I called the day before to make a reservation for lunch on a Sunday, which was no problem.

We arrived at early noon and there were no other patrons yet. Over the years, we have discovered that not a lot of people go out for lunch in the Netherlands (as opposed to Belgium, where this is much more the case, even mid week). As noon progressed, people started to come in, and as it was a beautiful Fall day, some people also sat outside on the sunny terrace in front of the restaurant.
The interior of restaurant Hortus is bright and spacious, soberly decorated with the focus on green and white. It immediately gives a nice and relaxing atmosphere. There used to be a bank in the building, and you can still see the firm and thick safe door in the cellar when going to the toilet.

We were greeted by the owner, who handed us the menus and – as we were inquiring about vegan options – gave us some suggestions. Just as we started to realise that he sort of looked familair, he asked ‘You are from Bruges, right?‘, and about at the same time we recognised each other! John Imamkhan from Bed & Breakfast Huis ‘t Schaep in Bruges, where till a couple of years ago, there also used to be a vegan restaurant Primavera (now only open for groups and special occasions).
What a coincidence and what a nice surprise! 🙂 We had a bit of a chat, and he explained how he started restaurant Hortus with his brother and sister in law recently. Great! 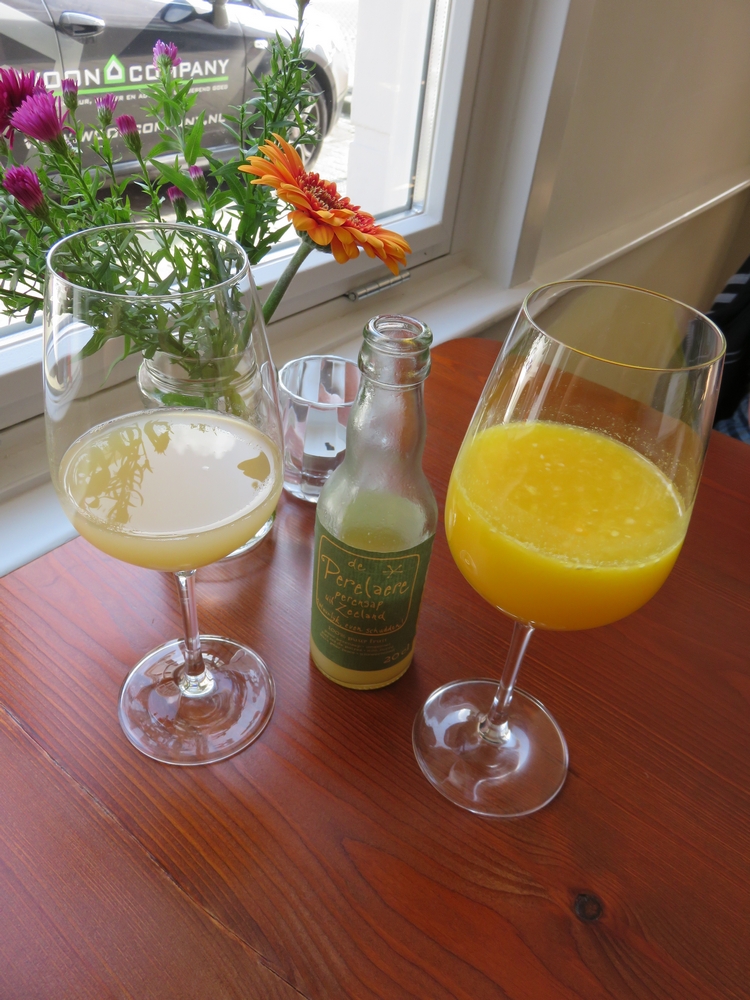 pear juice and orange juice, 3,75 each

The vegan wines are clearly labelled on the menu. This is the first time we’ve seen this in any restaurant in the Netherlands or Belgium (we have seen vegan wines marked on menus a lot during our stay in Brighton in the UK in the Summer of 2015, but not overhere). (If you are wondering why some wines might not be vegan, check here). 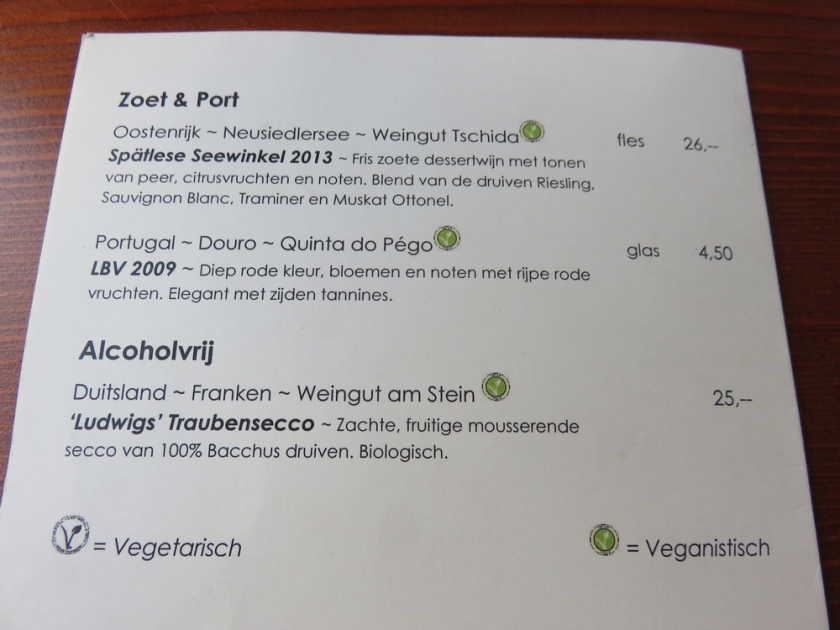 Part of the selection of wines and other drinks: with vegan label

The menu for lunch at Hortus offers more typical snack items. The evening menu is more gastronomical and is mainly vegan. John offered us some appetizers that are normally not available for lunch, and we were fine with that.
So as a starter we had an egg plant boat (8,50€) and soup of the day which was cabbage soup (4,85€).
It was beautifully presented, and delicious too! The soup had a slight but fresh sour taste, nicely contrasting with the salty bread stick. On the egg plant boat were deep fried crispy olives, great idea! 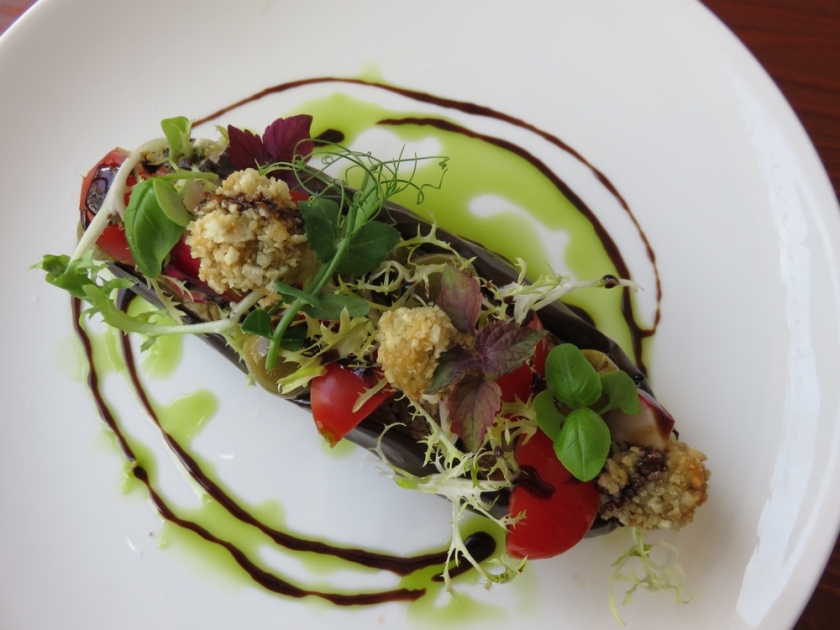 As a main dish for lunch, there are also several vegan options. We ordered the satays with peanut sauce (12,50€) and the burger (11,50€). The burger doesn’t come in a bun (because the bun is not vegan), but in slices of bread. That was a bit of a pity, but it was nice nonetheless. 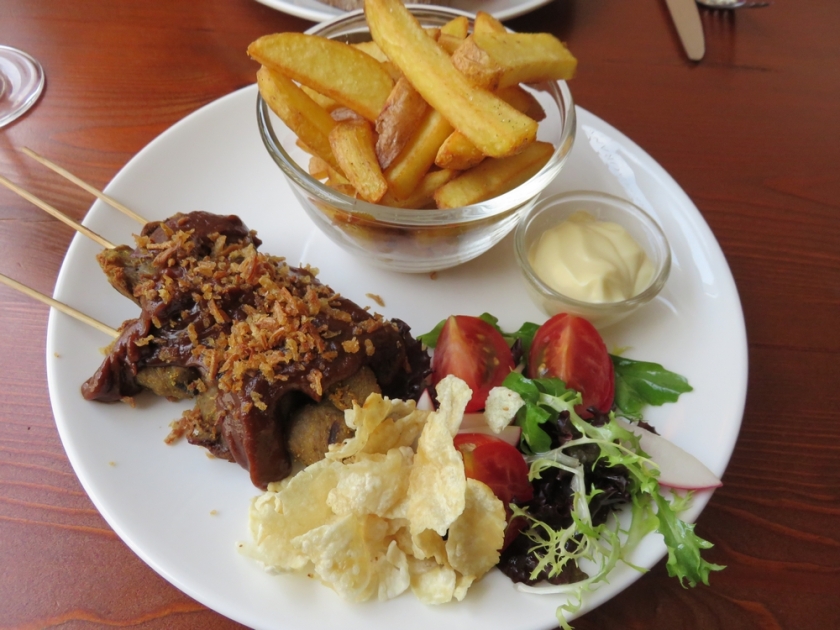 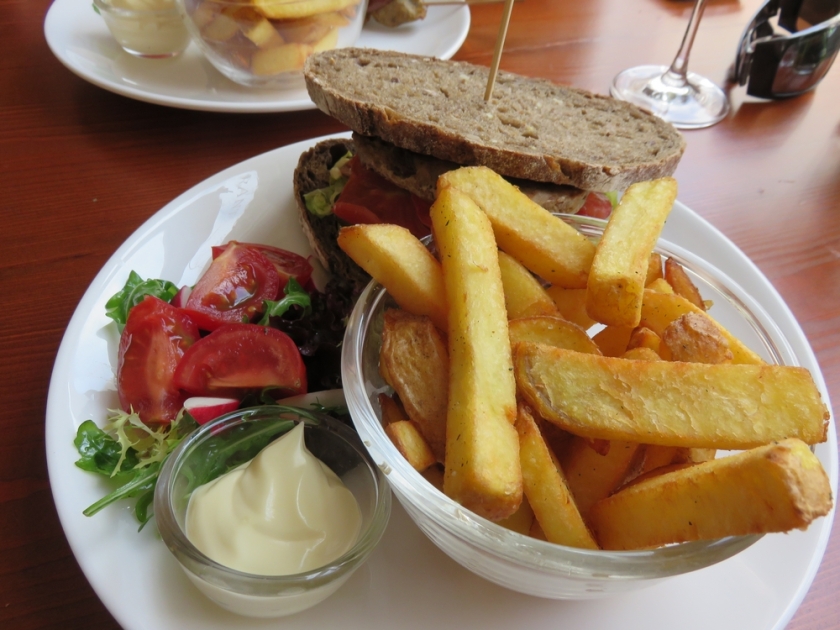 We were already full, but wanted to try some dessert, so we shared this one: Cassave coconut cake with coconut parfait and marinated pineapple (8,50€). And yes, it tasted as good as it looks! 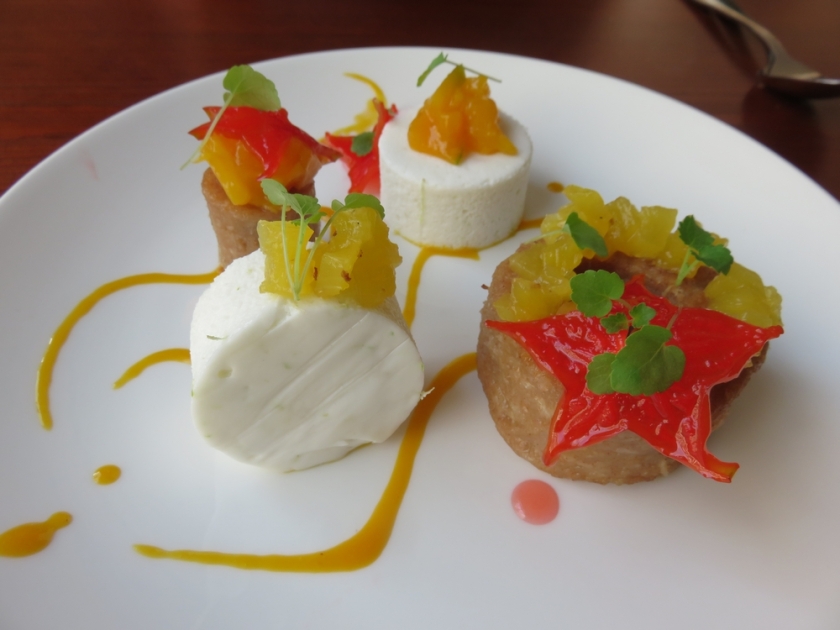 We had a very nice lunch, and it was a nice surprise to see John again. It is also very reassuring that he is very knowledgeable about (non)vegan ingredients, and his friendly manner immediately makes you feel welcome and relaxed.
Whenever we are back in The Hague, we will definitely visit again, as we really want to check out the dishes of the evening menu!