restaurant review #170 – Mie Vie is a vegan lunch and coffee bar in the city center of Ghent. It is located just next to the Vrijdagsmarkt, on the north side of town. I was here for lunch a couple of weeks ago with a friend.
Afterwards we visited Cat Café Dreamcathers which is just 2 minutes away, where we had vegan brownie (review will follow).

The website mentions MieVie is a place for “brunch, lunch and sweet hunge”. The menu mentions several sandwiches, paninis, salads, and muffins. One orders at the counter, the food is brough to the table, and when one leaves, pays at the counter.

I didn’t visit the toilets at Mie Vie, so have no photo to include here, and don’t know whether it’s accessible (Why do I otherwise include a pic of the toilet? Read about it HERE ). The restaurant itself is with a rather large step at the front door, and inside there’s another step to reach the back of the restaurant room.
Mie Vie it is not really a big lunch place, and it soon filled up. But it never felt crowded. My friend and I both agreed that the radio was a bit annoying at times (we prefer some easy listening music). 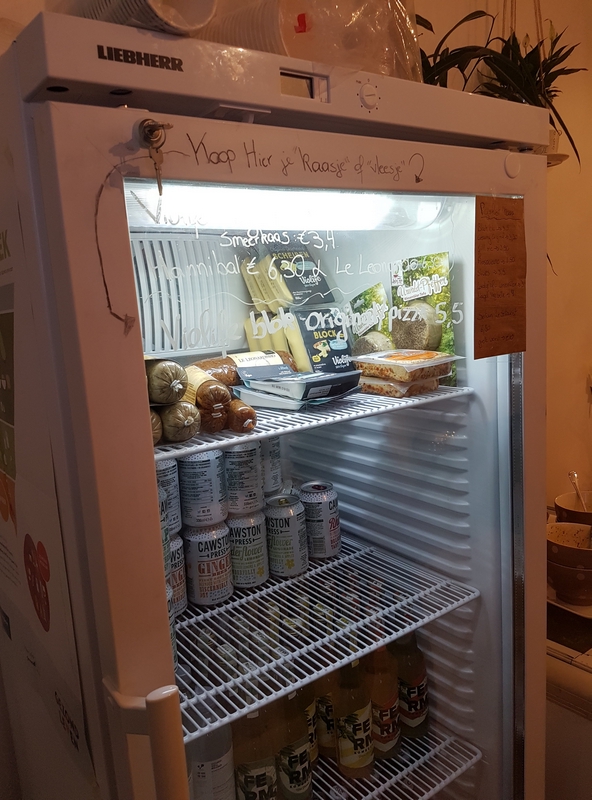 All in all: we had a nice light lunch. Reasonably priced (but if you have a big appetite, you might want to order two paninis). Nice little place, and would definitely visit again when in Ghent.

It was a very somber and rainy day in Ghent. Vrijdagmarkt, near MieVie:

He might have a mean look, but he is a real sweetie 😘
I just learned of the passing of Bernard (Bernie) Rollin. Professor of philosophy, animal sciences and biomedical sciences.
There's also a Hawaiian Poke Bowl in Kortrijk! @hawaiianbowl
To jump or not to jump? 😄
Homemade seed crackers! 🤤 These are awesome 👌👌
We had a great dinner at vegan popup restaurant @ohma.resto in Brugge (by @vegansa.catering) 🌿🌿
I does pay to ask for vegan options 😉
The chicken gang (part of 😉)
We visited restaurant @hetslachthuis in Leiden (NL). Yes, that translates as 'the slaughterhouse'. But no animals are slaughtered here, as it is a vegan restaurant! 🙌 🐖🐄🐑🐔