Vegan Summerfest 2018 is already a couple of months behind us, but I still wanted to add some photos of the event to my blog. I have documented all the previous editions (2015-2016-2017), so also did not want to have this edition missing. So here are some impressions!

The edition in 2018 was the first time Vegan Summerfest was held in the EXPO in Ghent, a more spacious and accessible location. That also comes with a price, and this year was also the first time the festival was no longer free, but with an admission fee. But that also came with a spacious parking, and Expo has great connections with public transport of Ghent.

We were there early, as we wanted to avoid the bigger masses that usually come in the afternoon. There was however a huge queue leading up to the entrance though. Although it was pretty dark that morning, luckily it stayed dry!

entrance, with the foodtruck area behind the fence, Vegan Summerfest, Ghent

Once inside there were the usual suspects: lots of stalls with food, some with clothes, and body and care products. And organisations. As we were early, there was still plenty of space to move around. It did get more crowded in the afternoon though.
There were also outside areas: on one side with the foodtrucks and very spacious terraces, with music, on the other side (inner court) a more ‘silent’ area for those who wanted to get away from the noise and crowd. Great addition to have this seperate space.

The talks were now also in a seperate area (fenced area of another hall), which is a huge improvement to previous editions (regarding noise coming from the main hall). Expo Ghent does not really have seperate conference rooms with all the facilities that comes with that, and the number of talks at VSF was really limited. Would love to see more variety of presentations about veganism and animal rights. More presentations and workshops (like there is for example at VegfestUK), about veganism and the environment, sports, animal rights, veganic gardening, etc, would give the festival more ‘content body’, and make it more balanced with respect to the commercial side.

We spent some time on the terrace, and by that time the sky cleared and there was lovely sunshine. By that time the queues at the foodstalls were also getting longer and longer (and the queue at the toilets got immense, so more toilets for next editions would be welcome).
It was great to catch up with friends and see so many familiar faces, and get to say hi to some people I had previously only spoken to online!
We had a great time, and so nice to see huge interest in this event. 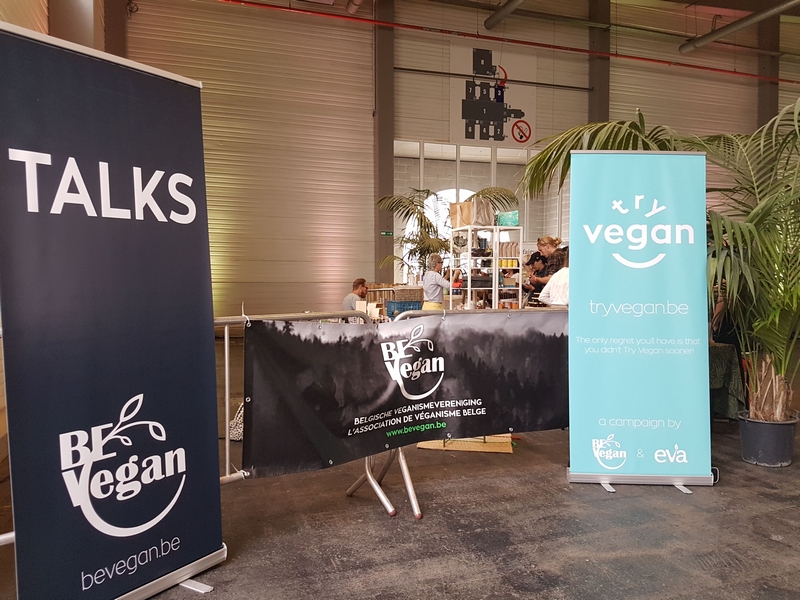