Restaurant review #70 – Zukini is a new saladbar in the Overpoortstraat in Ghent, which is famously (or infamously if you prefer) known for its many student pubs. It had been ages since I last walked through this street. But sure enough, the pavements were still drenched in the smell of beer! 😉
Apparently I walked by the address of Zukini two times, and then looked up the street number again on my phone, to realise it was in the big building where the university restaurant used to be (many moons ago, that just shows how old I am ;-). The building now houses a supermarket and other shops, and at the left of the entrance, you can also find saladbar Zukini. (UPDATE: see below)
I was meeting a friend here for lunch.

Salabar Zukini is spacious and bright, clean and tidy. Everyting was spotlessly clean, and also seemed brand new. Nice photos in the bathroom too (see pic below 😀
Although the seats are empty on the photo, the place soon filled up for lunch, with going by their age looked like mostly students. Zukini also offers take away. There are only about half a dozen seating places, so I guess you need to be either early or lucky to get a seating spot.

The concept is pretty straightfoward: you can put together your own salad bowl for only 7€ choosing a leafy salad, three vegetables or fruits, a ‘premium’ (beans, rice, potatoes, …), a ‘proteine’, a dressing and a topping (sesame seeds, olives, parsly, …). It is not a vegan saladbar, but they do offer three vegan ‘protein’ options: ‘minced meat’, ‘chick pieces’ and ‘bacon’. All dressings are vegan, except for the one with honey. At an extra cost you can add extra portions of these categories.
next to this, you can also choose from the ‘seasonal salads’, which also has a vegan option. 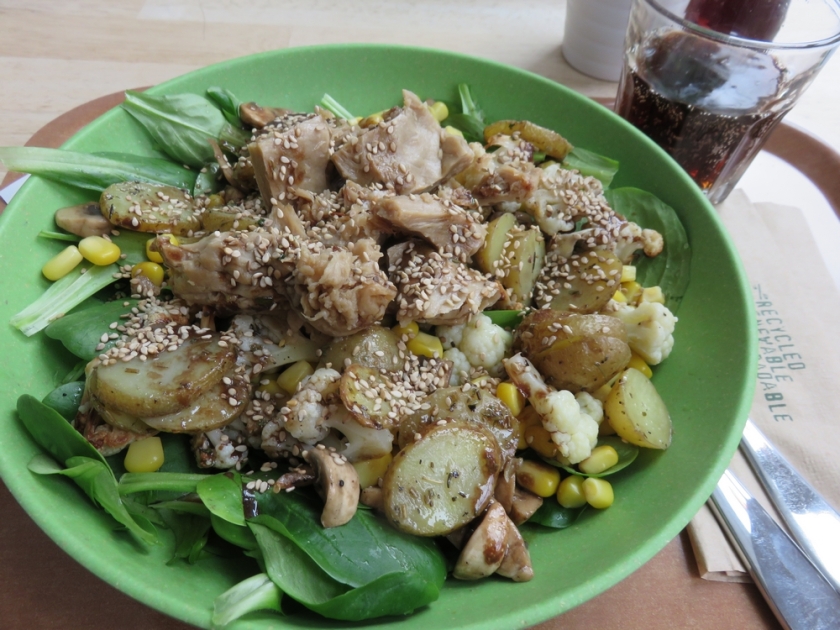 We each choose the basic version (7€) and this turned out to be quite enough for a light lunch. Very nice! The cola was 2,30€. There were also vegan brownies, but we decide to have a dessert at Bar Italiano, which has vegan icecream and is just down the road from Zukini! (Review will follow here)

Nice wall paper in the toilets, which were spotlessly clean. (in recent reviews, I try to include a pic of the toilets, as this determines the overall impression of the place)