‘Klaaskoeken’ are not really cookies, but more sandwich like breads. I could not find a proper English translation for it! They are traditionally eaten in Western-Flanders (most in the south of the province) around the period of Saint-Nicholas. (Sinterklaas or Saint Nicholas is on December 6, a date when children in many countries (especially Netherlands, Belgium) wake up to find toys and candy that Saint Nicholas on his horse and his helpers have brought to their homes, through the chimney – as the legend goes. The sandwiches mostly take the shape of a horse ( calles ‘kloajspèrden’) or a man or another figure (we also make ducks). Whether you particpate in this children’s feast or not, they are delicious! One eats them with a bit of ‘butter’, or with bread spead. 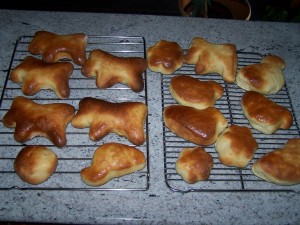 It’s very rare to find vegan ‘klaaskoeken’, so we experimented.
Note: this recipe calls for advanced preparation: the dough needs time to rise. 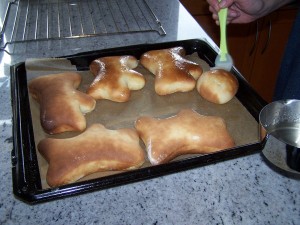 to make them shine: brush them with sugar solution