Misogyny. Ableism. Ageism. Vystopia. Health-shaming. These are some of the words that I have come to learn more about in recent years. After a long period in which I hardly found the time nor had the energy to follow up any literature closely, I have recently refound a drive and eagerness to pick up some ‘more serious’ stuff again.
I have been reading about vegan activism, the sociology of human-animal relations, intersectionality and the entanglement of the oppression of humans with that of other animals. I am also picking up information from discussions in facebook groups, blogs and other online articles. I have looked up terminology that was new to me, discovered new authors, and am trying to work my head around theories and hypotheses.
I still have many questions, but I am learning (aren’t we all, always?), helped with feedback provided on online platforms.

I feel this is a must read for anyone in the animal rights movement, ànd those fighting for human rights. Truly inspirational. It seemed like so many things 'fell into place' when I was reading this. ➡➡ David Nibert (2002). Animal Rights / Human Rights. Entanglements of Oppression and Liberation. ⬅⬅ ☘☘☘☘☘☘☘☘ #intersectionality #davidnibert #animalrights #animalrightsliterature #sociology #sociologist #capitalism #humanrights #entanglement #oppression #liberation #animalliberation #racism #sexism #speciesism #ageism #ableism #book #bookcover #humanliberation #mensenrechten #dierenrechten #sociologie #animalrightsbooks

Photo from my Instagram account that shows my hand holding up the book in my garden
(Animal Rights/Human Rights. Entanglements of Oppression and Liberation, David Nibert, 2002)

But on those online platforms, there is also a comment that occassionally pops up. Educate yourself! Just google it! Don’t come here expecting to be educated!
I cringe whenever I see such a comment (especially in groups focussing on the interconnectedness of oppressions which are supposed to be a safe haven and an example of inclusiveness). I also wonder how the recepient of the comment takes it on board.

I do not expect others to do the work for me. I hardly ever post questions online, because indeed, there’s a lot of information out there that I can simply find myself. But sometimes I do have questions about other people’s comments, about theories of hypotheses, about the information that has been provided. What do certain words mean? How does it relate to anti-speciesism or the plight for animals? And sometimes I cannot (easily) figure this out myself.
But even then I sometimes refrain from asking my question. Or even refrain from making a comment tout court, not sure my comment will not be beside the point, maybe a misinterpretation from what is actually meant, or I will be countered with a ‘go educate yourself‘ reply.

Replying ‘educate yourself’ to a question or comment, is an expression of privilege.

Next to the possible deterrent effect (scaring people away from asking information, from entering the discussion), the point I would like to make is that replying ‘educate yourself’ to a question or comment, is an expression of privilege. Telling people to go educate themself presupposes that that person has ready access to all the relevant information and knows how to find his/her way in that wealth of information. It also pressuposes that the person has all the physical and mental abilities and skills to process that information. And often there’s also an additional language barrier: he or she must be able to find and process information that is given in another language than one’s native language.

There’s a wealth of information to be found, in books, in magazines, on the internet. It’s out there.  But that does not mean it is readily available for everyone. Purchasing books and magazines can be a costly affair, and might not be your number one priority when you’re struggling to just make it to the end of the month. Some literature can also be found for free at public libraries, but libraries’ numbers are declining. In the UK for example, several hundreds of public libraries have shut down in recent years.
There’s a wealth of information at ‘our’ fingertips when we go online. But world internet user statistics show that only about 54% of the world population uses the internet (2017). With higher usage in North America (95%) and Europe (85%) and lesser usage in Africa (35%) and Asia (48%), and inequality according to (ao) age, gender, class and education. So although the digital library contains a wealth of information, not everyone in the world has (equal) access to it. And even with internet access, not everyone knows how to look up the information and discern the rubbish from the serious literature, the tabloids and fake news from the ‘genuine’ news and information, or to place it in its context.

Although global illiteracy has grown substantially in the last two centuries (from 88% to 17%), there are still large sections of the population that are illiterate (see also Literacy data Unicef). And with the digital revolution, computer literacy has become increasingly important. According to an OECD study in 33 ‘rich countries’, only 5% of the population has high computer-related abilities, and only a third of people can complete medium-complexity tasks (and the study even left out people older than 66). Statistics show the large education inequality across countries and between groups within countries.
After some years as a researcher in academia, I worked as an educator in a youth correctional facility. Although aware of stats and theories about exclusion, poverty and education, it was confrontational to discover that some of the teenagers were (practically) analphabetic. Most also had no idea about the meaning of words like progressive and conservative, left wing and right wing, socialist and liberal, although one of the obligatory ‘educational’ activities at the institution was to watch the national news, of which they had to write a summary.
So even when the information is readily accessible out there, not everyone has the abilities or has had the educational environment that helped develop those abilities, to process that information. Moreover, not everyone has the physical or mental abilities to be able to process the information, in the form or level it is provided (e.g. some visually impaired people will struggle with printed information).

Although I consider myself relatively fluent in English (but also aware that most likely some grammar or spelling faults will have crept in here), writing this text in English will have probably taken me three or four times the time it would have taken me to write it in Dutch, my native language. It also takes me a lot more effort to read books and discussions in English, although I realise that I am fortunate to actually be able to get through an English written text, which might otherwise even be challenging for native English undergraduate students. Yes, many people speak and understand English, but there are also billions who do not. Furthermore, there is most likely also interesting information provided in other world languages like Russian, Chinese, Spanish or Arabic, although I have no idea about it, let alone in less ‘international’ languages like Nepali, Sotho or Korean.

I benefit from many privileges: I am privileged to have enjoyed higher education, to be born and living in a rich country, and to be white. I am able to read, have acces to information, can go on the internet whenever I want. And yet I also struggle to ‘educate myself‘. I have been dealing with chronic diseases for nearly three decades now, and although it mostly impacts my physical abilities, it also impacts my abilities to process the information. Brain fog. Exhaustion. Loss of concentration. Rereading a passage three times and still not being able to make any sense of it. Not finding the time to pick up that book that’s placed invitingly on top of the stack, because I need to recuperate from an afternoon out, because I’m living parttime, because I don’t have the spoons to deal with anything else than just … living. No longer being professionally involved due to disease also means I am cut of from professional relations and social and also information opportunities that otherwise come with the job. 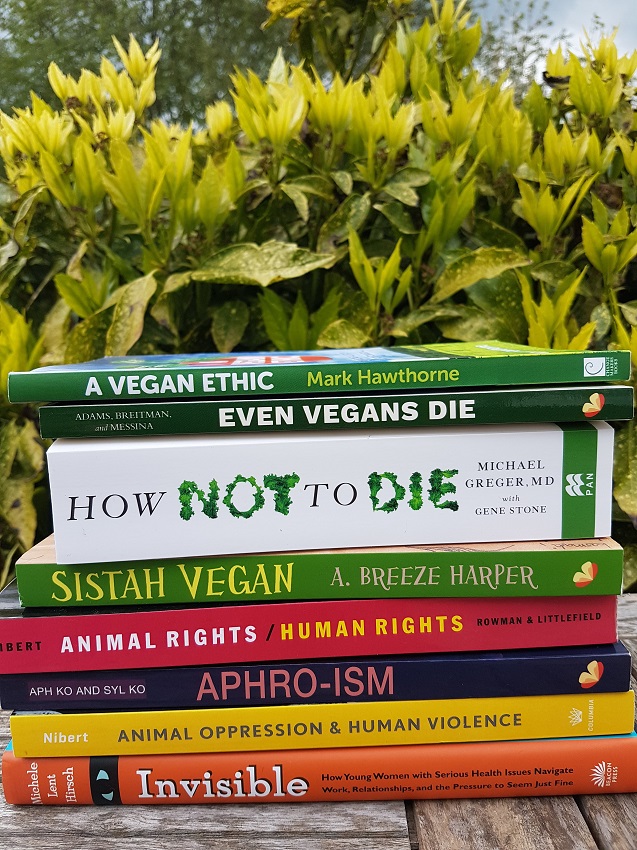 Some of the books that I have been trying to read lately. (stack of book in front of shrub in my garden). Titles: A Vegan Ethic. Even Vegans Die. How not to Die. Sistah Vegan. Animal Rights/Human Rights. Aphro-ism. Animal Oppression & Human Violence. Invisible. How Young Women with serious Health Issues Navigate Work, Relationships, and the Pressure to Seem Just Fine

Educating oneself is self empowerment. But educating oneself is not so easy and straightforward for everyone.
When I’m asking a question, I do not ‘expect’ to be educated. I will have done my homework, tried to figure it out by myself, looked up information. Yes, I realise that some people don’t, are just there to troll, or really do expect to ‘be educated’. But there are always so many more people that read along, that can benefit from the information given, that maybe don’t have the abilities to look up or process the wealth of information out there.

When someone asks a question, if you have the motivation, energy, intellectual capabilities or other abilities to give that information, please do. If you can explain your situation, if you feel comfortable sharing experiences, your thoughts, I would love to hear. Even if it is simply a link to an article, book, podcast or even a previous online discussion where some information can be found or that issue was also raised. If not, scroll by. But please, stop dismissing it with ‘educate yourself‘.

The title of my blogpost is inspired by the title of this post: Kay Ulanday Barrett, Some of Us Cannot Wait & See: 5 Thoughts on Undoing Ableism & Isolation In Your Community Spaces, Published online: The Body is not an apology.
https://thebodyisnotanapology.com/magazine/some-of-us-cannot-wait-see-5-thoughts-of-undoing-ableism-isolation-at-your-event/

#297 Take away vegan lunch from The Olive Street Food,&nbsp...

Pumpkin apricot tajine 🤤
When you forgot to close the lid of the compostbin 😁
Simple is good too. Pasta salad, with walnut oil 👌
Ian Thomas eet niet langer uitsluitend veganistisch: "Het kriebelde terug om nog eens naar de sushi of pizza te grijpen" "Ik wou af van dat exteme" zegt hij bij @radio2vrt @ianthomas
A look inside VEGAN SHOP Venga in Roeser, Luxembourg. @vengaluxembourg
Izy Coffee is a chain of coffeebars with now 8 locations in Flanders (mainly West-Vlaanderen). @izy_coffee
Pumpkin cheesepie with pecan topping.
We had lunch at vegan restaurant @rucolino_cucina_sana in Dudelange (Lux) on a beautiful Summer day on the terrace.
So happy to see this caterpillar of a swallowtail butterfly in my garden, on the fennel! 🦋🦋