At the end of August we went to Vegan Summerfest in Ghent, organised by Belgian organisation BE Vegan. We were also at the previous editions in 2015 and 2016. The location was the same as last year, in the Artcube, at the edge of Ghent.
The day started a bit cloudy, but afterwards there was glorious sunshine in the afternoon (even left me a bit sunburnt!). It was a lovely Summer day.

I made a short clip for IG from inside and outside. This was when it was still very calm, around midday. In the afternoon, the outside square was filled with people and huge lines queuing at most stalls. Again, as previous years, a huge turn out!

A lot of familiar brands and products at the stalls, but also some new discoveries.
Upon entering the hall, we immediately queued at Bakkerij Frimout, to buy about a dozen of Danish pastry to take home (as last year, he was quickly sold out, and we didn’t want to miss it this year!).

This is Chloë, about 3-4 months old. She's very timid, a real sweetie 😍 She was handraised with lots of love ❤ by @vegan_kelli . She hadn't seen other chickens before she came here (2weeks ago), and is having a bit of trouble finding her place in the group (scared of the others!). But with some help and TLC, she's gradually gaining more confidence👍 And yes, I wanted to show off my new Tshirt, bought at #vegansummerfest 😁😎 🐔🐤🐔🐤🐔🐤🐔🐤 #adoptdontshop #chickens #chicken #iloveveganpizza #pizza #vegantshirt #bevegan #vsf2017 #govegveganshop #kip #kippen #chloe #adopteereenkip #showoff #tshirt #whatveganslooklike #veganselfie #whatvegansdo #animalrescue #adopt #veganswithchickens

Here is an overview of what we ate (it did require some patience to buy these, as nearly all stalls had very – VERY- long queues!).

We briefly dropped in in the conference hall for one of the talks, but couldn’t focus with the background noise coming through.
Given the huge turn out (which is of course great) inside soon became too crowded and cramped for space. As the event keeps growing year after year, maybe a bigger and more accessible location (with more parking, less/no stairs and with accessible toilets) could be taken into consideration. Being a free festival, the treshold for people who are interested to come take a look and for vegans to bring non-vegan friends along is of course very low. Having to pay an entrance fee would probably deter some people from coming, but on the other hand, it would allow to look for a more accessible and spacious venue. Maybe something to consider?

As such, after having looked at most of the stalls inside, we spent most of the afternoon outside. It was great to catch up with friends and see so many familiar faces, and get to say hi to some people I had previously only spoken to online!

Here are some more impressions from Vegan Summerfest 2017:

A nice surpise was coming home and turning on the TV and see Vegan SummerFest covered in the news on national TV! (you can briefly see us in the coverage – see screenshot below, on top of the stairs, very very tiny though 😀 )

Click on image for link to video on national TV: 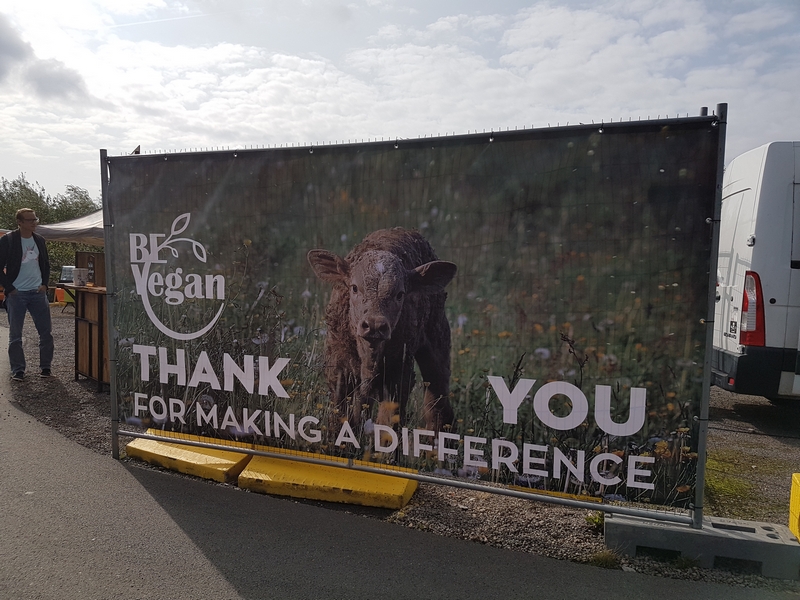 Thank You, for making a difference, Vegan Summerfest, Ghent, 2017

Photo from BE Vegan Instagram. Can you spot us? 😉

She was a person