It’s that time of the year! Pumpkins! As you could see in one of our previous posts, we have dozens of pumpkins from our garden. Luckily pumpkins are very versatile and can be used in anything from soups to desserts to baking.
I like these pumpkin waffles a lot: light and crispy! Feel free to replace the sugar with another sweetener (or you could also try leaving it out altogether).
I either use freshly made pumpkin puree, or a portion that I prepared previously and stored in the freezer, on those occasions that I don’t have the time to cut and clean the pumkin. 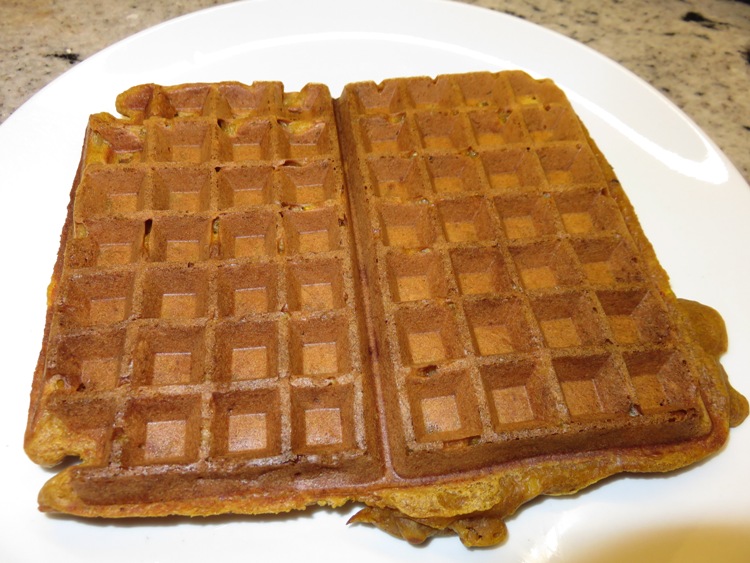 Makes 6 double waffles (like the one in the photo) 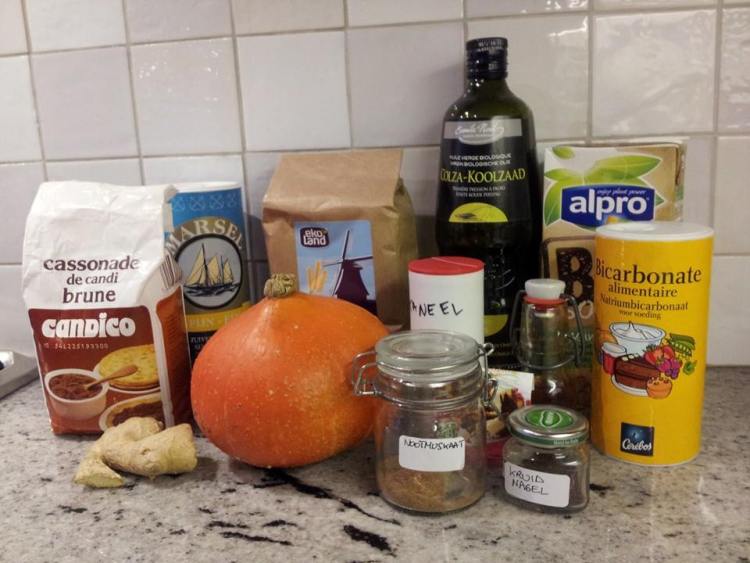 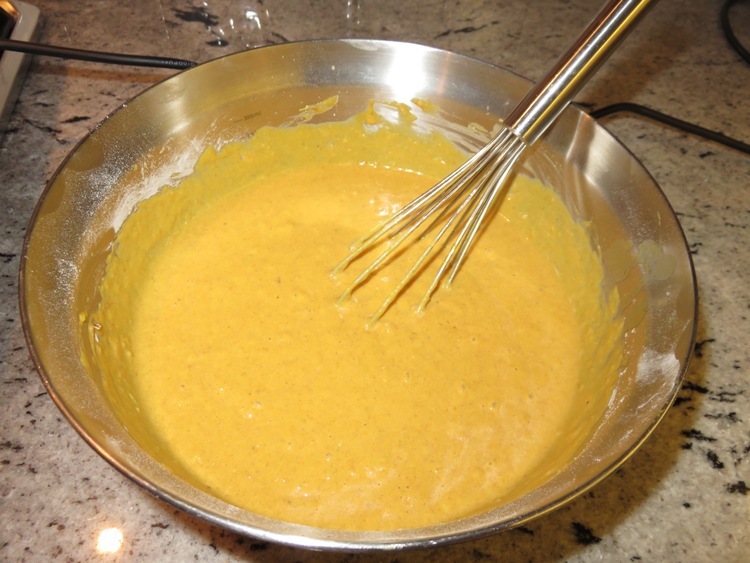 The recipe for these vegan pumpkin waffles is based on one in Vegan with a Vengeance, by Isa Chandra Moskowitz.
In this cookbook, it says this recipe makes 24 regular waffles (or 12-14 Belgian waffles). However, We could make 12 regular waffles with these ingredients (= 6 double ones like the one in the photo, meaning 12 single ones of 7×4).
I wouldn’t make Belgian sized waffles with this recipe, since Belgian waffles (which are actually called Brussels waffles in Belgium) normally have a very light texture, which these pumpkin waffles don’t have.

The starlings are plundering the cherry tree. I think there must be about 50 of them (sound). If we dont pick some cherries today, there wont be many left ... 🍒🍒🍒🍒🍒🍒🍒 #starlings #cherries #cherrytree #kersen #spreeuwen
In my garden. Artichokes and digitalis. We dont eat the artichokes. I let them flower because they are very popular with bumble bees. And honestly, I think artichokes leaves are highly overrated 😉 #inmygarden #veggarden #artichokes #digitalis #gardener
Homemade vegan food! Grilled sweet potato and phyllo dough with tomato sauce, mushrooms, crumbled tofu, soy pieces and spinach. Lettuce and spinach from the garden. 🌿🌿🌿🌿🌿🌿🌿🌿🌿🌿🌿 #veganinspiration #veganfoodshare #veganfood #homemadefood #sweetpotato #inmykitchen
Homemade vegan food! Lasagne with tofu spinach 'ricotta' filling, and tomato sauce and béchamel sauce. Spinach straight from the garden! 🤤 🌿🌿🌿🌿🌿🌿🌿🌿🌿🌿 #homemadefood #inmykitchen #lasagne #vegan #veganfoodshare #inspiration #makeityourself #fromscratch
'Yes, I'm sleeping with my tongue out. Do you mind?' 😄 Wanderer Felix. Will be nearly a year since he first showed up here. Has completely settled in and is now very relaxed, even occassionaly comes to sit on our lap (still wants to roam though, especially at night). 🌿🌿🌿🌿🌿🌿🌿🌿 #adoptdontshop #felixthecat #felix #tongue #catsofinstagram
Tomato plants ready to be planted. Seven varieties! 🍅🌿🍅🌿🍅🌿🍅🌿🍅🌿🍅🌿🍅 #fromseedtoplant #growyourownfood #greenhouse #tomatoes #gardener #moestuin #mygarden #tomaten #tomatoplants #growfoodnotlawns
Homemade vegan food! Creamy avocado potato salad. With asparagus. Recipe from #ohsheglows #angelaliddon 🥔🥑🥔🥑🥔🥑🥔🥑🥔🥑🥔🥑 #vegan #veganinspiration #veganfoodshare #inmykitchen #potatosalad #veganfood #asparagus #avocado
QUOTE "Maybe the symbolism in the image lies in the protection pigs need from humans. In the end, pigs don't need facemasks to 'protect' them from Covid19 (or any other virus). They need to be not bred, exploited and killed by the billions and protected from humans." Read more on #criphumanimal link in bio - https://criphumanimal.org/2020/04/20/pigs-with-face-masks/ [ID: Drawing of lateral view of pink pigs with with face masks, 1 pig central in picture, 6 others scattered in background, blue background] Credit image: Emma Lynch/BBC #covid19 #intersections #pigs #facemask #criticalanimalstudies #animalstudies
Homemade vegan food! Curry with broccoli, wheat pieces, red onion and sesame seeds. Baked oyster mushrooms, leeks, red beans and garlic sauce. With ovenbaked sweet potato fries 🌿🍁🌿🍁🌿🍁🌿🍁🌿🍁🌿🍁 #vegansofbelgium #veganfoodshare #veganfood #homemadedinner #vegan #veganinspiration