Restaurant review #15 – Rosenobel just opened a couple of months ago. It was announced in several media as being a vegetarian restaurant, although they also serve non-veg items. On their website they state to have a ‘vegetarian inspired kitchen’.
We had already emailed to ask whether they also have vegan items standardly available and got an affirmative reply. Great! 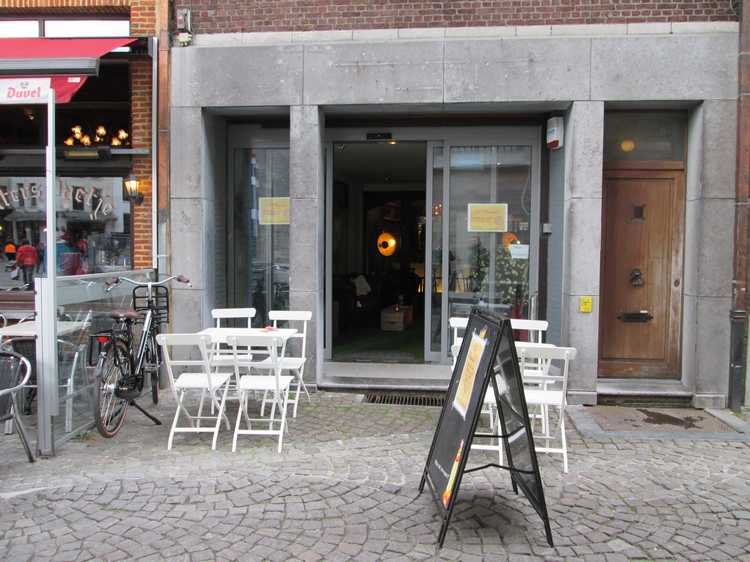 Rosenobel, left of the cathedral

We were there for lunch on a Saturday and the restaurant was remarkably quiet (just one other table besides us).
Vegan items are not indicated on the menu card, so we asked the waiter about some of the dishes. He was apparently taken by surprise by some of our questions (eg whether the toast in the ‘toast seitan’ was vegan or not, whether we could get veganaise instead of mayonaise) and had to go back and forth to the kitchen a couple of times to check for ingredients. But he was very friendly and helpfull!

We chose the soup of the day (4,50€) as a starter (can’t really remember which it was, but it was said to be vegan, think it was carrot soup), and the seitan toast (with fried seitan sausages, curry veganaise, minth, spaghetti of cucumber and a salad on the side) (14,50€) and red curry with coconut milk, tofu, fried vegetables and unpolished rice (17,50€). There are several organic juices availble and we got a ‘Rosenobel’ apple juice (3€) and an organic grapefruit juice (2,5€). 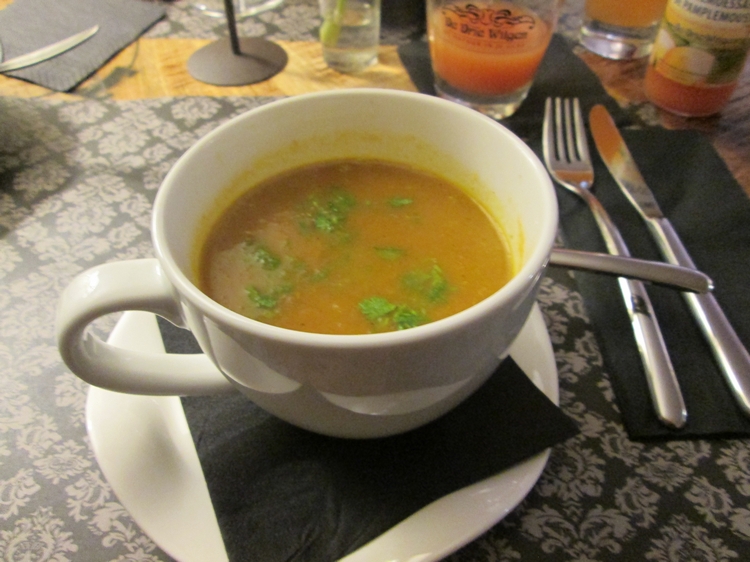 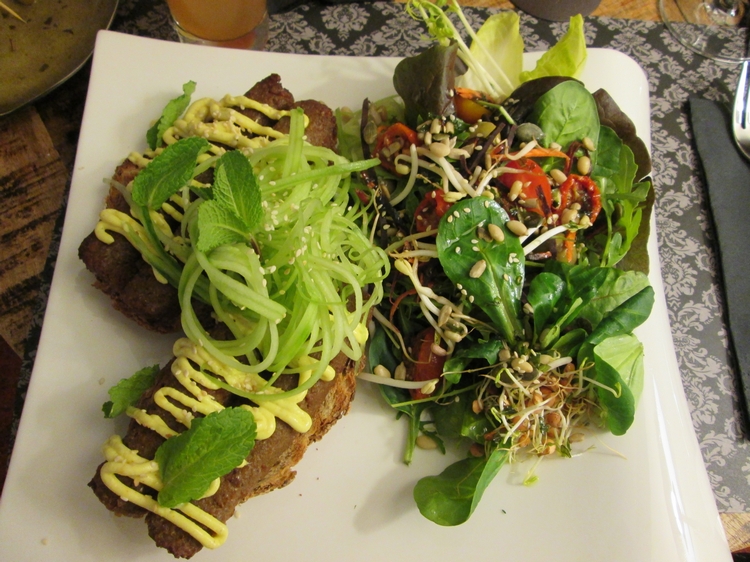 seitan toast, with fried seitan sausages, curry veganaise, minth, spaghetti of cucumber and a salad on the side, 14,50€ 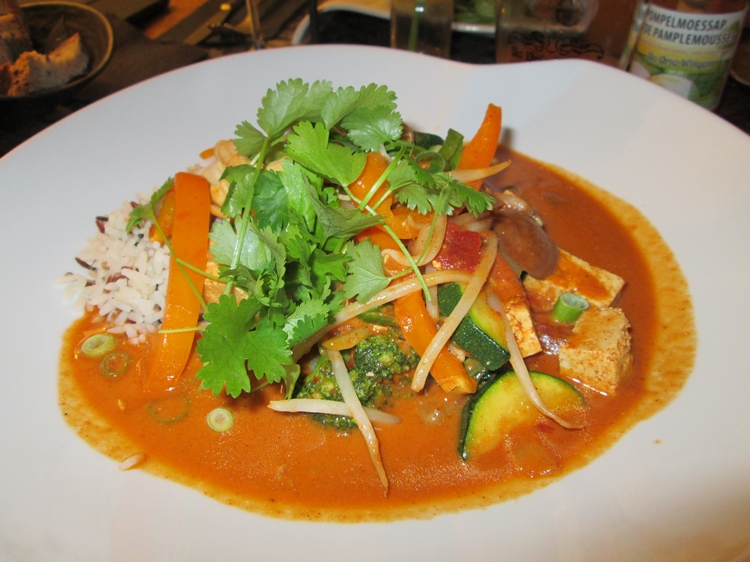 The toast with seitan and the curry veganaise was tasty, but a bit of an overwhelming portion. Really liked the cucumber spaghetti, nice idea to try out at home! And a lovely mixed salad on the side. The tofu coconut curry dish was also nice (but nothing new here). The chunks of zucchini in this coconut dish seemed a bit strange to us.
We were more than satied, so didn’t fancy any dessert. There don’t appear to be any vegan desserts on offer anyway, but the waiter told us a fruit salad is always possible.

Rosenobel is a nice addition in Antwerp

We enjoyed our visit to Rosenobel very much. Food was very nice, fresh and varied. The noise from the semi-open kitchen was a bit disturbing, but it was probably just very noticable because there were no other patrons in the restaurant (a bit later another couple did arrive). Staff was very helpfull to check for non-vegan ingredients.
Comfortable seatings and nice decor. It should be noted that the nice stairway you see in the back of the restaurant is in fact a rural photo, but it does give the room a ‘grand’ feeling. We were a bit puzzled by the fabric of the black armchairs, and e-mailed Rosenobel afterwards to inquire whether these are leather or faux leather (as a friend also mentioned this to me later on after she had visited the restaurant, stating it was leather, which would indeed be a strange choice). We’re still left in the dark here, as Rosenobel didn’t reply. So maybe they are, maybe they aren’t.

Rosenobel is definitely a nice addition for Antwerp, where options for vegan dining out are rather scarce. 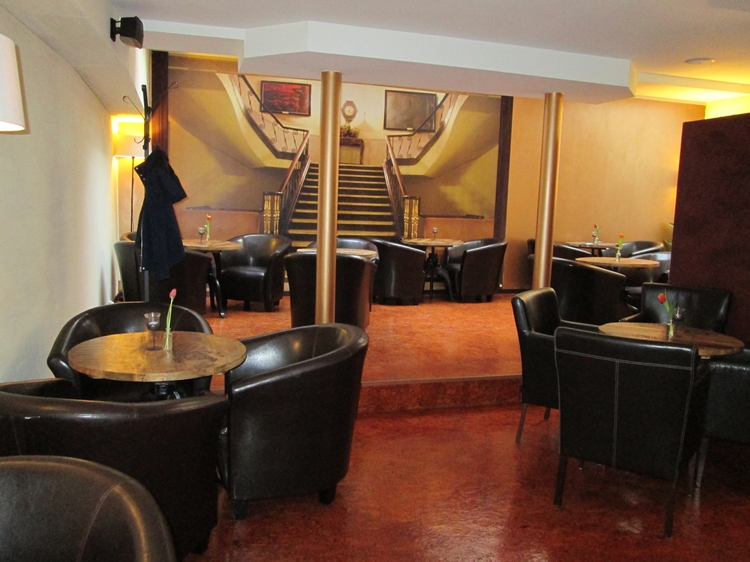 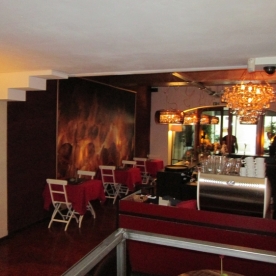 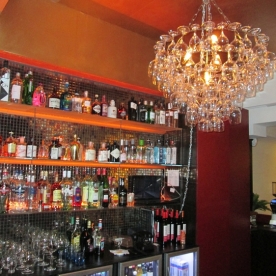 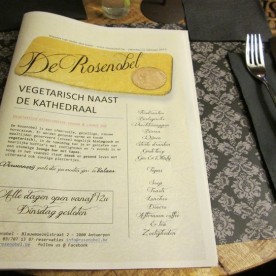 That's dinner sorted! 🤗😊
National dishes à la vegan for our national holiday 🇧🇪 😁
Oh, how I wish this was closer! When we were a couple of days in Limburg, we went to organic vegan shop @bio.vegan.winkel in Budel (NL).
New place in town! Coffee house @basiel.urbangreenhouse
Een heel treffende foto ...
Homemade vegan dessert plate. This is from last week, when we had friends over for dinner (finally! It was a long #lockdown 🤗).
We had a very nice lunch at vegan restaurant @honderdprocentmianne in Genk! 👍
First courgette of the season from the garden!
Homegrown cauliflower!