On our last city trip to London last Summer, we visited the Animals in War Memorial. It is located on the upper East side of Hyde Park at the Brook Gate.  On our previous visit to London (for the Intersectionality conference at VegfestUK, Nov 2016) we barely got a glimpse of the monument as we passed by with a cab on busy Park Lane, but a large truck in the lane next to us was unfortunately blocking our view on the Memorial.

The memorial was designed by English sculptor David Backhouse to commemorate “all the animals that served, suffered and died alongside the British, Commonwealth and Allied forces in the wars and conflicts of the 20th century” (quote from Animals in War Memorial). It was unveiled in November 2004*. 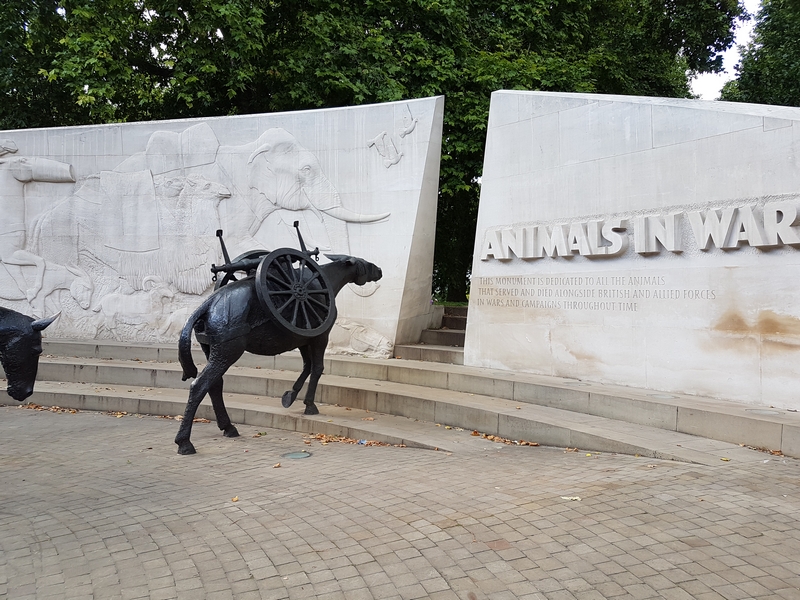 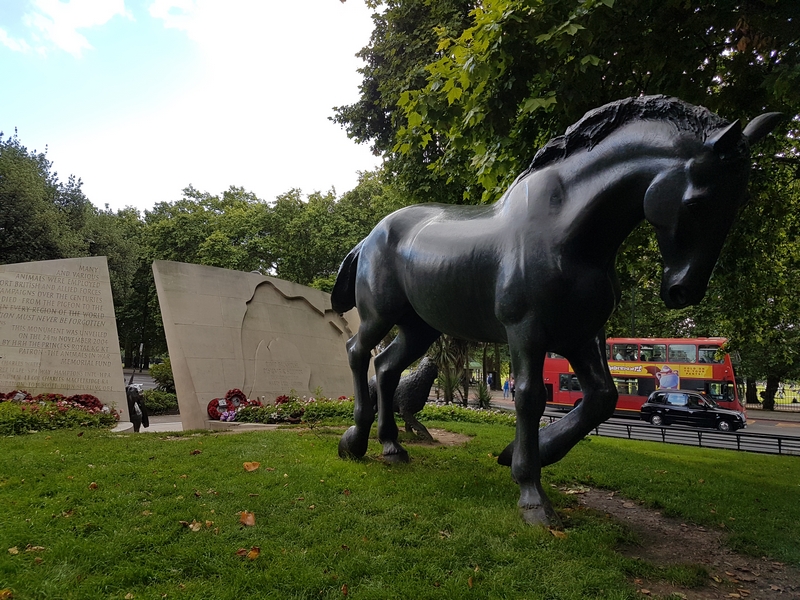 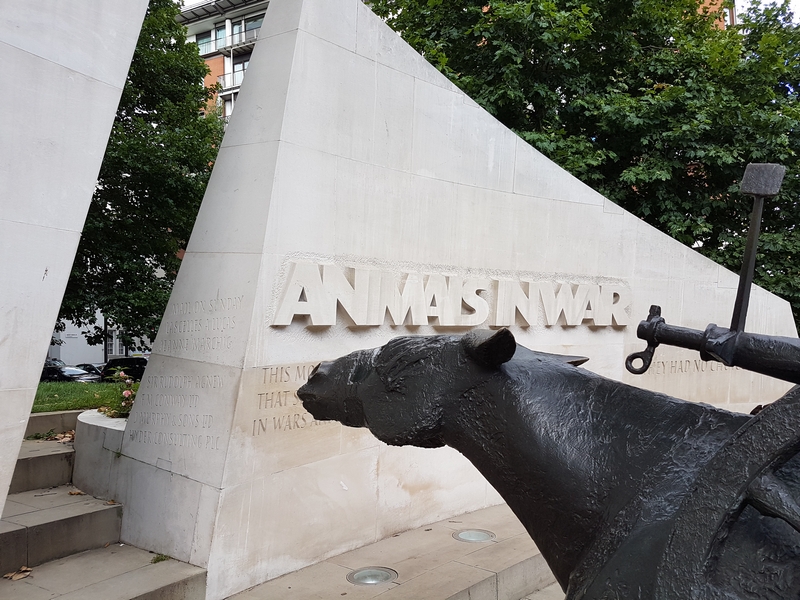 I have very mixed feelings about memorials and monuments dedicated to animals who have ‘served’ for law enforcement, as soldiers, as bomb sniffers or protection guards. One the one hand, it is heartwarming to see so many people care about the animal victims of war, and commemorate them on days like November 11.

I feel that respecting and commemorating the millions of animals fallen on our battlefields is nobel, but it should go hand in hand with a plea to halt the exploitation of animals.

On the other hand, the animals surely have not signed up for this, and could not care less about the medals and monuments bestowed upon them.  They do not realise that they are serving a human made ‘higher purpose’ (the ‘hero’ label in this context is as such also very anthropocentric) and they just want to live, free from the horror of war, the risk of being killed, the ensuing shell shock, the physical and mental trauma. The honouring of animal casualties of war in many cases seems more like a way of easing one’s conscience: you see: we truly care about them, we even give them a medal! But if one really cared about them, they wouldn’t be used for such purposes in the first place.
As such, I feel that respecting and commemorating the millions of animals fallen on our battlefields is nobel, but it should go hand in hand with a plea to halt the use and exploitation of animals, which is most often missing on such commemorations.

I wrote a blogpost about this earlier: The animals do not want our medals nor statues.

They had no choice, Animals in War Memorial, London

So with these mixed feelings, we arrived at the Animals in War Memorial, after our stroll through Hyde Park. Approaching the monument, we saw a family of four sitting on the steps underneath the ‘They had no choice‘ engraved text, eating a fastfood lunch. Oh the irony

We waited a while and meanwhile took a look at the back of the monument. But as the family made no sign of getting up anytime soon, ànd I though this was quite unrespectful ànd I wanted to take a picture of the monument (preferably without them in the frame), I politely asked them to move so I could take a photo. They seemed a bit annoyed by my question (probably not as much as I was), but eventually got up and moved on.

The Memorial in itself is quite serene and invites you to go up the steps and take a look beyond the two walls. The area in front of the walls, symbolises the war arena, with statues of two packed mules heading towards the gate between the walls. Beyond the walls are statues of a horse and dog, running into the garden.  On the left wall are images in bas-relief of different animal species used in combat.

What struck me is the location of the Memorial. It is in between the two park lanes on the east side of Hyde Park. On each side, the flow of busy urban traffic dominates the senses: the metropolitan traffic noise is inescapable, the view is a constant flow of driving by coloured vehicles, and even the smell is unmistakenly urban smog like. Just in front of the memorial, another stream of cars and busses moves sideways to Brooke lane. As the many millions of animals who have ‘served’ in the military or for police enforcement must have often felt very scared, uncomfortable by the crowds, flashing lights and all the noise surrounding them, any living animal who would be placed at the spot of the Memorial would most likely not feel at ease. Uncomfortable at best, scared shitless at worst. Maybe the location was choosen symbolically, to precisely symbolise the terror amidst which the animals were thrown. The Animals in War Memorial website cites it as “a superb Central London site” . And yes, from a human – and economic – perspective, it most definitely is. The animals, wanting foremost peace and a natural feeling environment, would probably disagree. 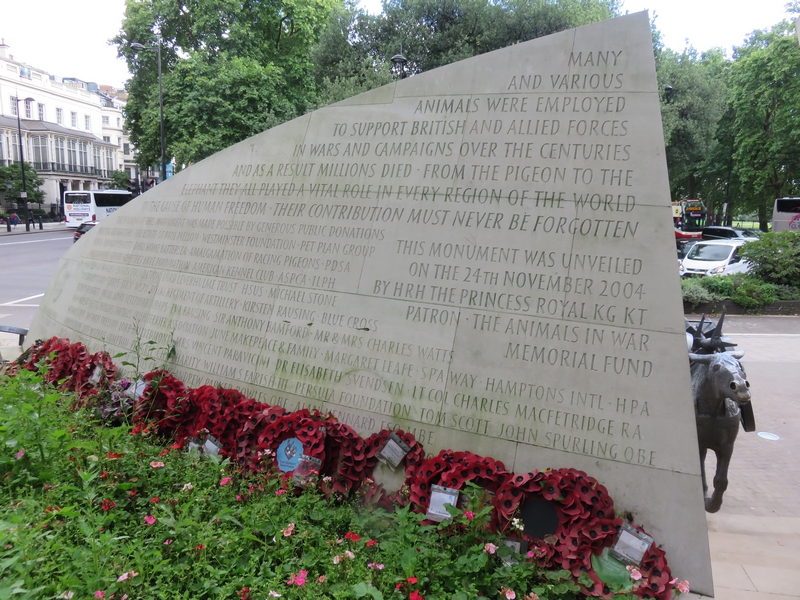 Back of Monument: “Many and various animals were employed to support British and Allied Forces in wars and campaigns over the centuries,
and as a result millions died.
From the pigeon to the elephant, they all played a vital role in every region of the world in the cause of human freedom.
Their contribution must never be forgotten” 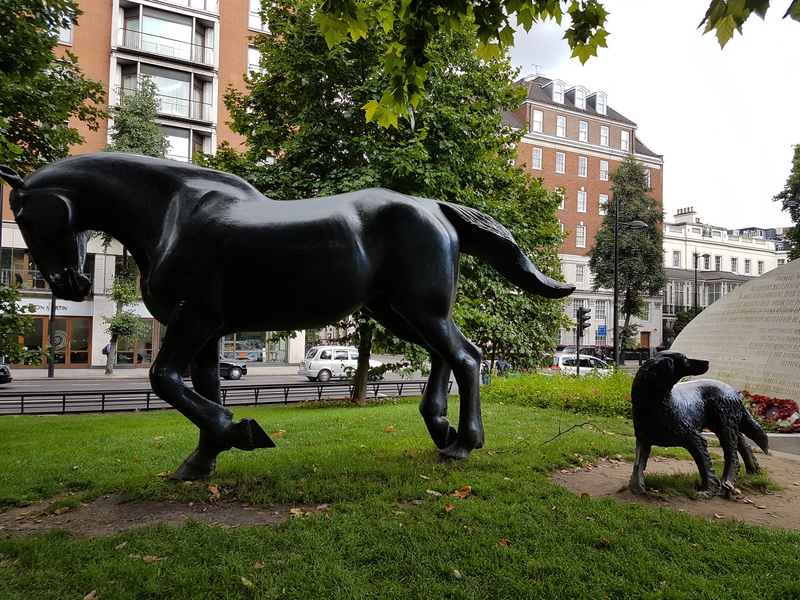 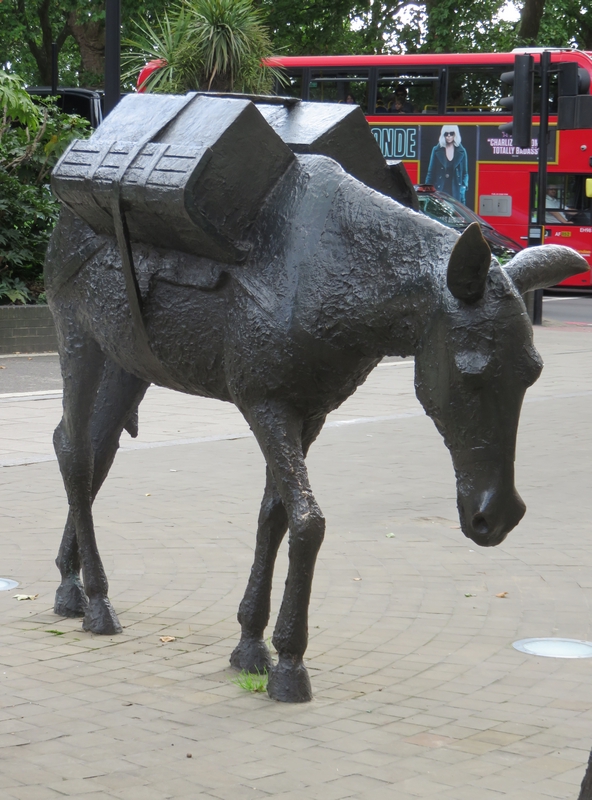 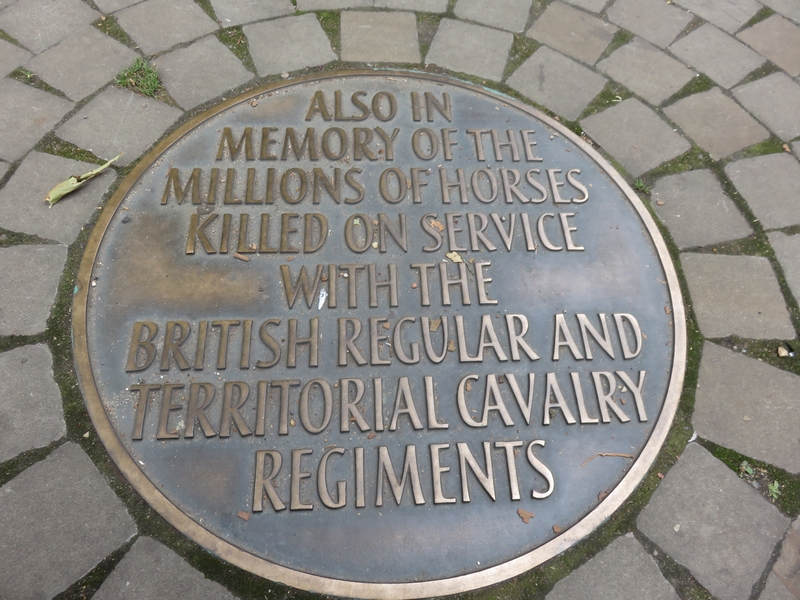 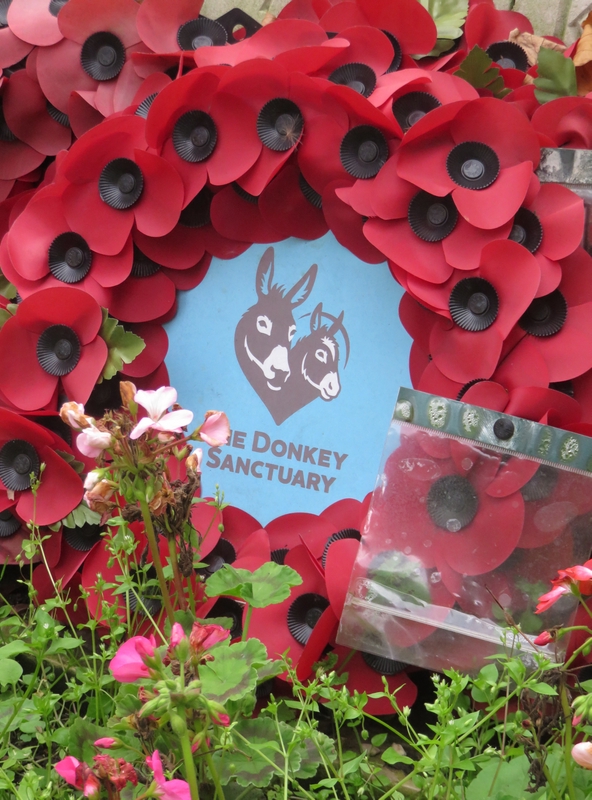 From the Donkey Sanctuary

During the unveiling in 2004, there was apparently a mule present. Being exposed to so much traffic and so many spectators, I thinks it must have been quite an upsetting experience for the animal …

The animals do not want our medals nor statues.

Armistice Day, but not for the animals.