Last weekend, there was a Hunting fair in Flanders Expo in Ghent (24-26 april, 2015). On the website of huntingexpo.be, it was announced as “the fair for hunters, with a passion for wild game and fowl, hunting and nature” (de beurs voor jagers, met een passie voor wild, jacht en natuur).

No, I did not attend. But I was in Flanders Expo, for the REVA beurs, which was taking place at the same time in one of the other halls. On the parking and the surroundings of Flanders Expo, you could detect the hunters from a mile away! Tweed coats. Round cheeks and red faces from outdoor life. And I spotted a lot of 4×4’s and other big cars with dirt traces on the parking lot (often occupying two parking spaces, not nice!). 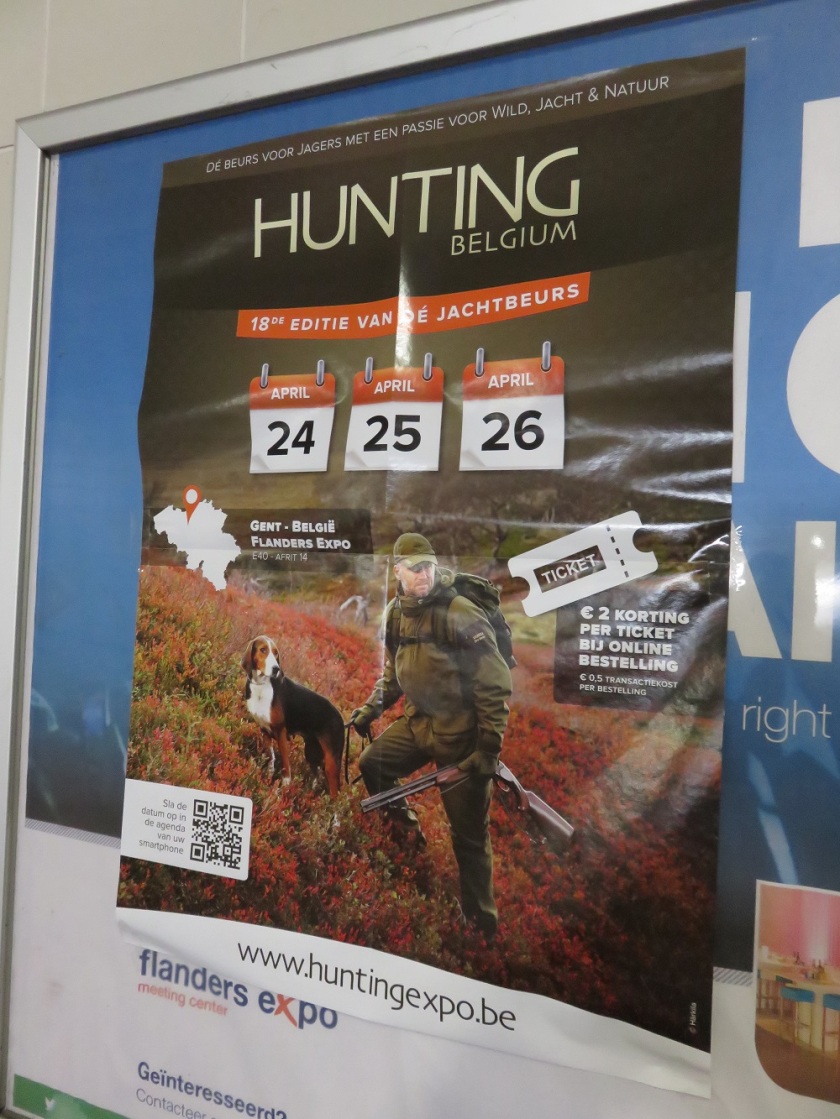 And yet, I would find it interesting to attend this hunting fair. To walk into the lion’s den as it were. To be clear, of course I am not the least bit fascinated by hunting and I absolutely do not support this anachronistic sport! I realy don’t like seeing them, the huntsmen, shooting on about everything that moves, a phenomenon by which we are also confronted around our house in wintertime. We’ve even had lead shots against our roof. My heart bleeds when I see a pheasant being shot down in full flight, and I’m thrilled when a rabbit or hare manages to escape through our pasture. One of our cats also dissapeared in suspicious circumstances during such a Sunday morning hunting expedition ….

The reasons hunters bring forward in defence of their sport are completely redundant. Even if certain animal populations require control (nature conservation), this does not necessitate the shooting of defenceless animals (e.g. birth control, relocation, …). Although they are often reluctant to admit it, their main care is about one thing: getting a piece of wild meat on their plate.

Know thy enemy. To beat them, to be able to discuss with them, you must know how they think.

So no, I would not enjoy being there, among the hunters at the hunting expo. I would probably be overwhelmed by feelings of anger, sadness and powerlessness. But still, I would find it interesting to listen along to the conversation among participants and exhibitors. Undercover that is, I would not walk around wearing my vegan T-shirt. 😉
To snoop around, listen to how they talk about animals and find out which rhetroric they use.  To ask questions, see how they react, how they think about nature conservation, which rationalisations they come forward with. To see which products are being sold, how they are recommended and advertised.

Know thy enemy. To beat them, to be able to discuss with them, you must know how they think.
But then I would have to pay for my entrance and I’m not granting them that favour … But if I ever could manage to get a free ticket, I would consider going.

Would you be able to enter the lion’s den?