A couple of months ago, I visited Alpro in Wevelgem (near Kortrijk, Belgium). The visit to the factory was organised by EVA West, a local division of vegetarian organisation EVA.
Alpro makes plant based products, made of soy, almond, hazelnut, rice, … Their soymilk, coconutmilk, pudding and yofu’s are omnipresent in about every Belgian supermarket and are also sold around the world. The factory is Wevelgem (Belgium) is the main factory of Alpro.

A visit to Alpro, Wevelgem

We got an introduction of about half an hour by a PR-manager, followed by the opportunity to ask some questions. Afterwards we visited the production units inside the factory. It wasn’t allowed to take photographs, but this promotion film on the website of local TV-channel Focus gives you a glimpse of the inside of the factory and the production units. 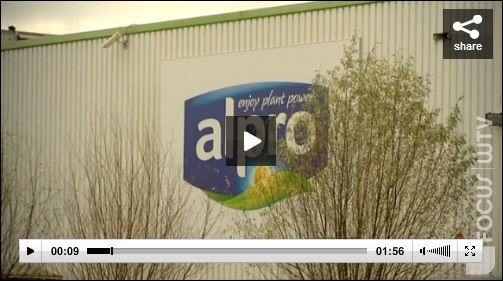 It was quite impressive! I saw thousands of tetra bricks, yofu’s and soy desserts pass in front of me. Very interesting to see how the bricks are foulded and sealed, how the dessert cups are filled and all products are labelled. We heard a lot of facts and figures about Alpro, its history, the company’s philosophy and goals, stats about the production, the origin of the raw material and many more things. Here are some things that were discussed:

– Provamel is the organic brand of Alpro.

– The company used to be called Alpro Soya, but the name changed to Alpro Plant Power in 2012. Since they no longer solely make saoy based products, but also work with almond, coconut, rice, hazelnut, etc.

– Until 2009, Alpro was part of Vandemoortele Group, and then it was taken over by WhiteWave, part of Dean. Hence Alpro Plant Power now resorts under Whitewave, that not only makes plant based products, but among other things also dairy products.

– Burgers and tofu (the so-called ‘meat-replacements’) will disappear from the product line. That part of Alpro is sold to a Dutch company. Possibly the products (with the same or another recipe) will still be made, but they will carry a new name.

– By 2016, 50% of all soy used should be locally grown. By locally grown, they mean from within Europe. At present, the share of locally grown soy is 30%. Most soy comes from Canada, a little bit from France and Italy. The organic beans are imported from China. All their soy is non-GMO and proterra certified.

– I wanted them to shed some light on the vitamine D added to some Alpro products, because this is a thorny item that keeps reappearing on several veg discussion boards (the question being whether the vitamine D is or is not animal based). They couldn’t give me an answer immediately, but afterwards we got an e-mail stating that “Alpro has never used vitamine D of animal origin, not even in the past”.

– I also asked why the Alpro products don’t have the trademark of The Vegan Society, but they didn’t have an answer to that question (see **note below)

– After the production of tofu and soydrinks, a pulp consisting of insoluble parts of the soybean remains, called okara. This okara is not used for human consumption, but goes to the nearby pig-industry to be used as animal feed. Reserach is being done to see whether the okara also can be used for energyproduction. I wanted to know the proportion okara with respect to a kilo of imported soy beans (being how much remains as okara after production), but they couldn’t give me the answer.

screenshot from the promo spot about Alpro, website Focus TV

A remarkable peculiarity in the guest room at Alpro. We could treat ourselves with a cup of coffe or tea. Next to the coffee cans and cups were, … little cups with cow milk. Duh! While right next to us miljons of liters of delicious plant drinks are being produced! Pointing to an obvious gap in the market: little coffee creamers with plant-based milk!

cowmilk to go with the coffee …

It was nice we got a goodie bag to take home, with the smaller versions of well known Alpro soy-products.

Promo spot Alpro Publi is on the website of Focus WTV.

I published this post originally on my Dutch blog here.

** Note: I noticed afterwards that some – if not all? Provamel products do carry the Vegan Society’s vegan label, and some (or all?) Alpro products carry the vegan label from the European Vegetarian Society (a different label though).