Restaurant review #65 – This new vegan hotspot in Ghent opened in 2015. Le Botaniste is founded by Alain Coumont, the same founder of world wide chain Le Pain Quotidien.
This review and photos of Le Botaniste in Ghent are from a visit in the beginning of December 2015, when I was there together with a friend.

Le Botaniste is located in the city center of Ghent, just next to the main shopping street (Veldstraat). On a side note, Dille & Camille (a nice shop for cooking pots and pans and other stuff) is right next to Le Botaniste, so that makes for a nice combined visit.
The interior is very nice and refers to an old pharmacist shop, with old bottles and jars lined up, and ‘prescriptions’ written on the menu.
Le Botaniste is not really a ‘restaurant’ though. There are no real dining tables, but either low seating table stools at one large low counter or high bar stools at some higher tables. There are also some benches in a verandalike room in the back. So not being able to sit back and relax was a bit of a bummer. And it is self-service. You can see what’s on offer on the large chalk board at the counter, and most dishes are also stalled out in the counter. You order and pay there (no cash!), and take your food and drinks with you on a tray to your seating place. 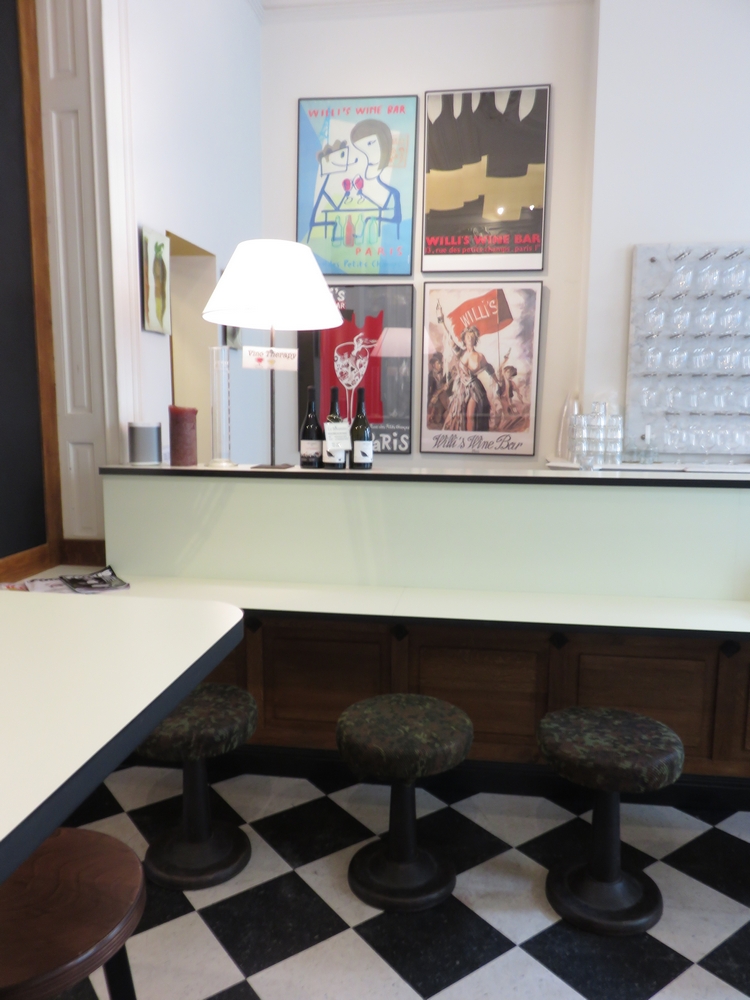 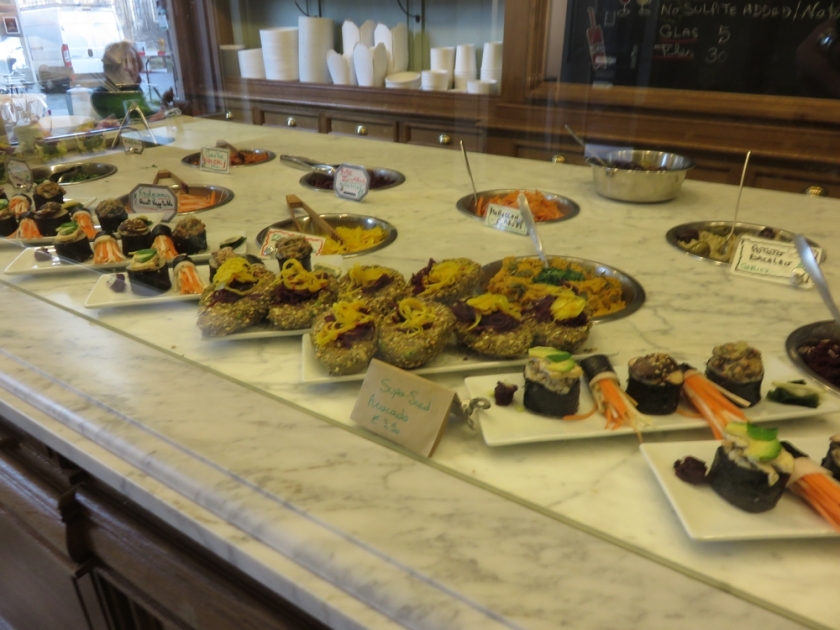 I had a sushi dish (5,95€) and two sorts of spreads with rice crackes (9,90€). My friend had a curry dish ‘Tibetan mama’ (7,95€) and the detox juice (4,95€). I would have loved to have a juice but the beet juice was the only one on offer (apart from a lemonade and wine or beer), so I just had some filtered water (0,95€).
The sushi was nice, lovely presented, but didn’t give me a wow experience. That sushi presentation stood in contrast to the spreads, being together in a plastic like bowl with the crackers on the side. The spreads were a big portion, but I would have preferred some bread (some nice bread from LPQ perhaps?) instead of rice crackers. My friend was a bit disappointed in the size of the dish (and I think I have to agree, as a main dish, it seemed rather small) and both of us felt like the dishes could use some ‘spicing up’ to give it some more flavour.
For desserts we had a Vulcano (apples and raisins, 4,50€) and chocolate pudding (4,95€). The Vulcano was nice, but after a few bites it quickly became monotone (and it was a huge portion). The tiny chocolate dessert was in our idea not worth the nearly 5€. 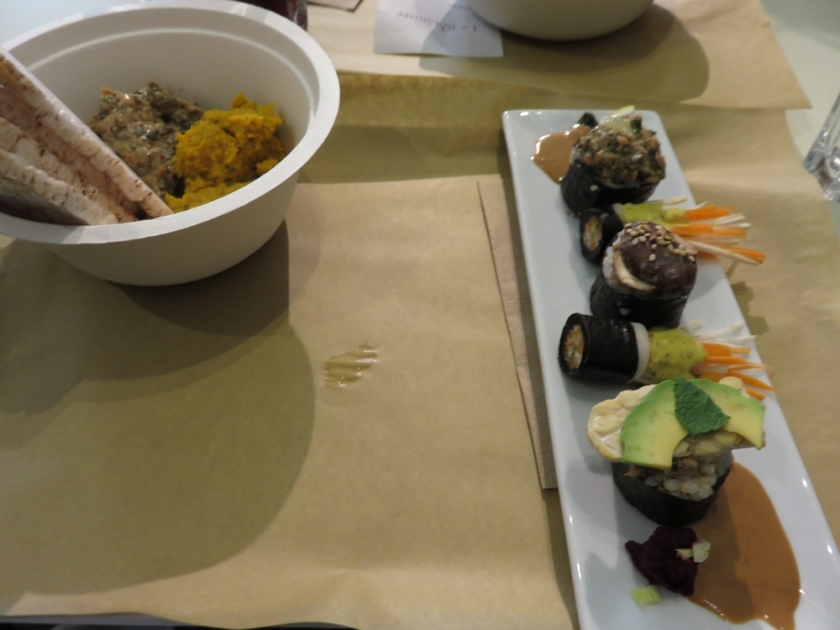 In sum: beautiful and stylish decor, standing in contrast with the self service and college-like trays for self service. I also did not find any coat rack (did I really miss this, or was there just no place for the coats?) which would have been handy to hang that thick winter coat (as there are also no back seatings on the chairs to hang it!). Uncomfortble seatings do not invite for long dining (which is probably the way it is meant to be, being more a fast-food type of place).
I can’t really make up my mind whether I find it cheap or expensive. Some prices seem fair: the main dish for example is only 7,95€, ànd everything is organic, but on the other hand it was a small portion, and everything is self service. 4,95€ for some crackers with spread (and 9,90€ in my case, as I ordered two types of spread) is pretty steep though.

It’s lovely to have another all vegan place in the city center of Ghent, but I was slighty underwhelmed (because of the lack of comfort and rather small portions of the main dish). I would also really like to see more options for non-alcoholic drinks. I also forgot to ask whether the wines and beers on offer are vegan certified.
So I do want to go back one of these days to give it another go. I feel like I haven’t properly discovered the place yet and want to try some more dishes on the menu. And I have not visited the toilets and photographed them, as I now always try to inluced a photo of the toilets in my most recent reviews ;-).

Another thing to keep in mind when visiting le Botaniste is they don’t accept cash – only payment with bank card. 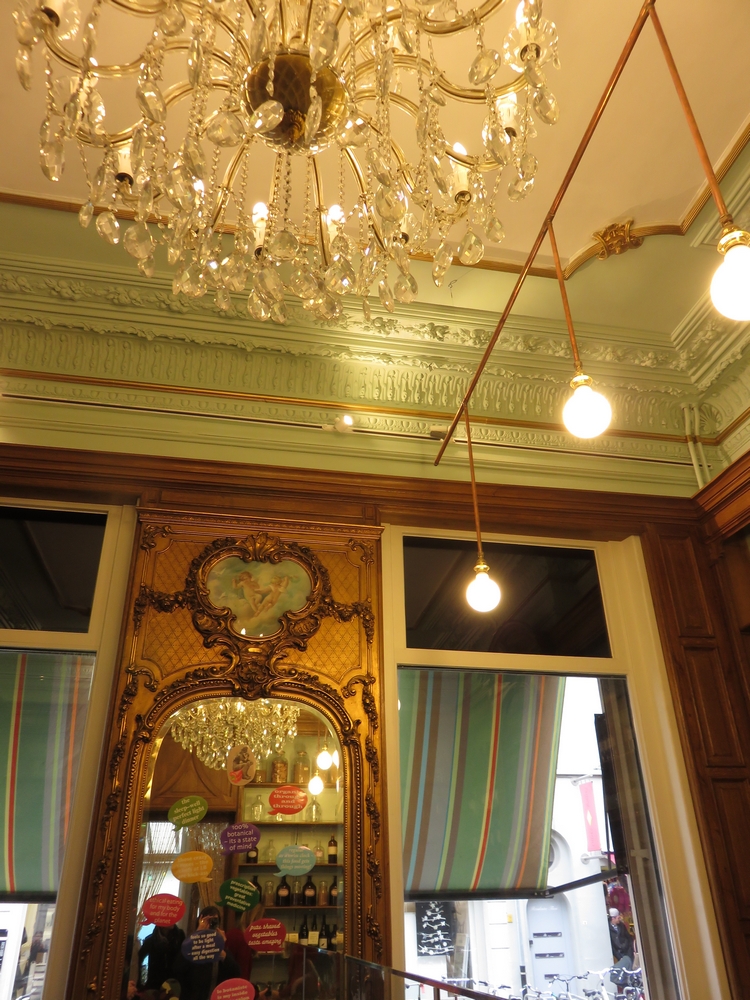 Apple upside down gingerbread!
A new breakfast! Pleasantly surprised about the combination of cacao, oats, peanutbutter and forrest fruits 👌
Waffle time! 🤤🤤🤤
Had to bring my plant babies from the greenhouse to inside the house, for at least a couple of days/nights 🌿🌿🌿 We had mild night frost last night - but I wasn't expecting any frost inside the greenhouse. ❄❄
GRAS + WORTELS? 🤔🤔
I had some leftovers from the filling from the sweet potato dish earlier. This was with mushrooms, chickpeas and bread croutons.
Stuffed sweetpotato (with chickpeas, mushrooms, bread croutons, celery) and greens on the side.
Here they are!!! 🤗🤗
Red curry with oven baked tofu. 😉